For generations popular culture has portrayed rodents as unwanted vectors of disease, unwelcome co-inhabitants of human dwellings, and generally “gross.” In the light of scientific advancements we have a better understanding of the fundamental role rodents play in natural systems. However, there is more to be done. My research focuses on the ecology and conservation of two native insular rodents in southwest Florida, and their interactions with a changing environment. 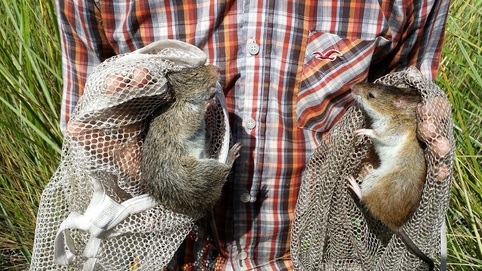 The Sanibel Island rice rat (Oryzomys palustris sanibeli) is highly aquatic and endemic to Sanibel Island, Florida. The insular hispid cotton rat (Sigmodon hispidus insulicola), also endemic to Sanibel Island, is commonly associated with dense, less hydric sites. While conservation of these organisms in perpetuity is one tenant of my research, I also aim to investigate hypotheses that may be applied more broadly to other species in other systems, and thereby have a greater net impact on global conservation efforts. With three field seasons down and three to go, there are many miles yet to travel and much to learn along the way. Please check back over the coming months and years as this project continues to grow and evolve in exciting ways.
​

My research chapters are as follows:

Chapter 1
Goal:
To understand what factors shape the distribution of Oryzomys palustris sanibeli

Questions:
​For more information on this project, contact wwboone@ufl.edu